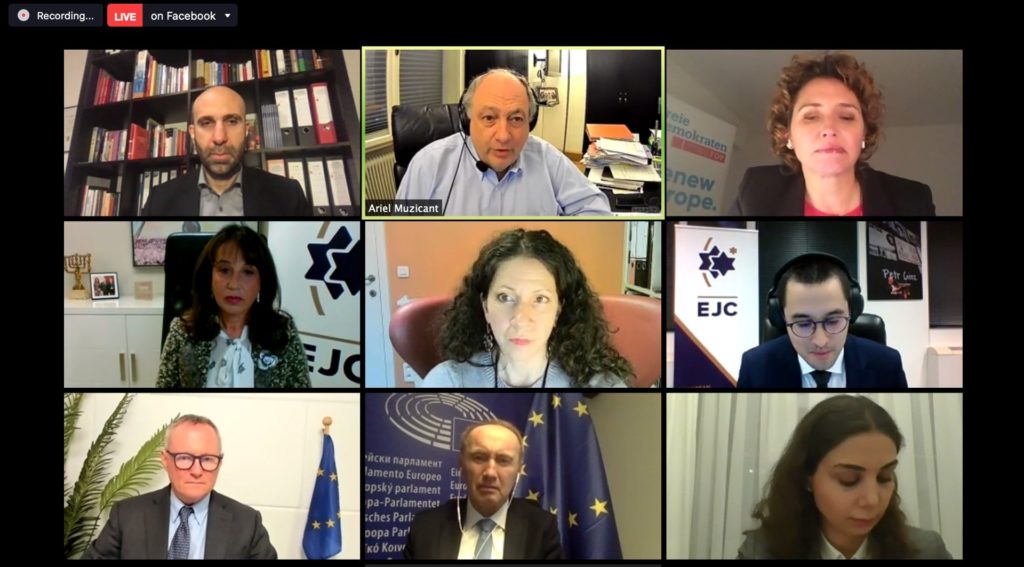 MEP Nicola Beer, Vice-President of the European Parliament and Chair of WGAS stressed the importance of prevention and education: “We need to begin in school, to give kids the tools to defend themselves against an avalanche of news and manipulation. We have to fight for education not only inside the classroom but also outside, in museums and memorials like concentration camps.”

“We need a quality media ecosystem, where we protect real freedom of expression and opinion but fight against pure insult. Independent media without disinformation and the spread of hatred means also to be democratic and to preserve deep-rooted European values,” Ms. Beer.

In her opening remarks, Raya Kalenova, Executive Vice-President and CEO of the European Jewish Congress (EJC) introduced the subject at hand: “The worrying spread of conspiracy theories, the rampant hate and disinformation online are driving factors of antisemitic violence in the physical world and those are the trends which aggravated in the context of the current pandemic.” Discussions focused how this phenomenon fuels the intensification of antisemitic violence in the physical world. The webinar set out to examine useful strategies to prevent those phenomena.

Dr. Ariel Muzicant, honorary president of the Jewish community of Vienna, presented the perspective of Jewish communities on this issue and highlighted the fact that this phenomenon has aggravated since the outbreak of the COVID-19virus.

In his comments, Dr. Muzicant emphasised the importance of empathy in the face of this proliferation of antisemitism: “Jewish communities need to feel that are not left alone. Jewish people would need not just speeches but also certain acts of sympathy and that it is clear that the basis of this pandemic has nothing to do with Jews and our existence”. “…”.

Michael O’Flaherty, Director of the European Union Agency for Fundamental Rights (FRA) addressed the main insights of and latest trends of the annual overview of antisemitic incidents published last September. Mr. O’Flaherty described the problem of gaps in data collection, and the disparities in the efforts of member states to gather data.

Expressing commitment to addressing the rise in antisemitic incidents, Mr. O’Flaherty added: “Jews are at the heart of Europe and if that heart stops beating, Europe is lost.”

Krisztina Stump, Head of Unit of the Media Convergence and Social Media in DG Communications Networks, Content and Technology of the European Commission informed the audience about the efforts of the European Commission in countering the proliferation of disinformation and how to ensure synergies with the fight against antisemitism, including the Code of Practice on Disinformation, the European Digital Media Observatory, as well as the upcoming European Democracy Action Plan and the Digital Services Act.

The discussion also featured Ahmad Mansour, German-Israeli bestselling author, psychologist and expert on prevention of extremism. Mr. Mansour discussed the effects of disinformation and conspiracy myths on the process of radicalisation, emphasising that: “Antisemitism is part of any radical group. Far-left, far-right and other extreme ideologies have something in common: they are antisemitic”.

“We need media and literacy skills to be able to differentiate between fake news and facts; theories and scientific facts. We need narratives to counter the existence of wrong narratives”, Mr. Mansour added.

Finally, MEP Othmar Karas, Vice-President of the European Parliament and WGAS Vice-Chair delivered concluding remarks, emphasising that “there is a political responsibility that we look at the roots and consequences of antisemitism, with a historical perspective but with an eye to the future too.”

“We need a public debate on antisemitism. I often see that it is on the sidelines, it should be more and more in the front. We have instruments, we need to use them”, Mr. Karas added.