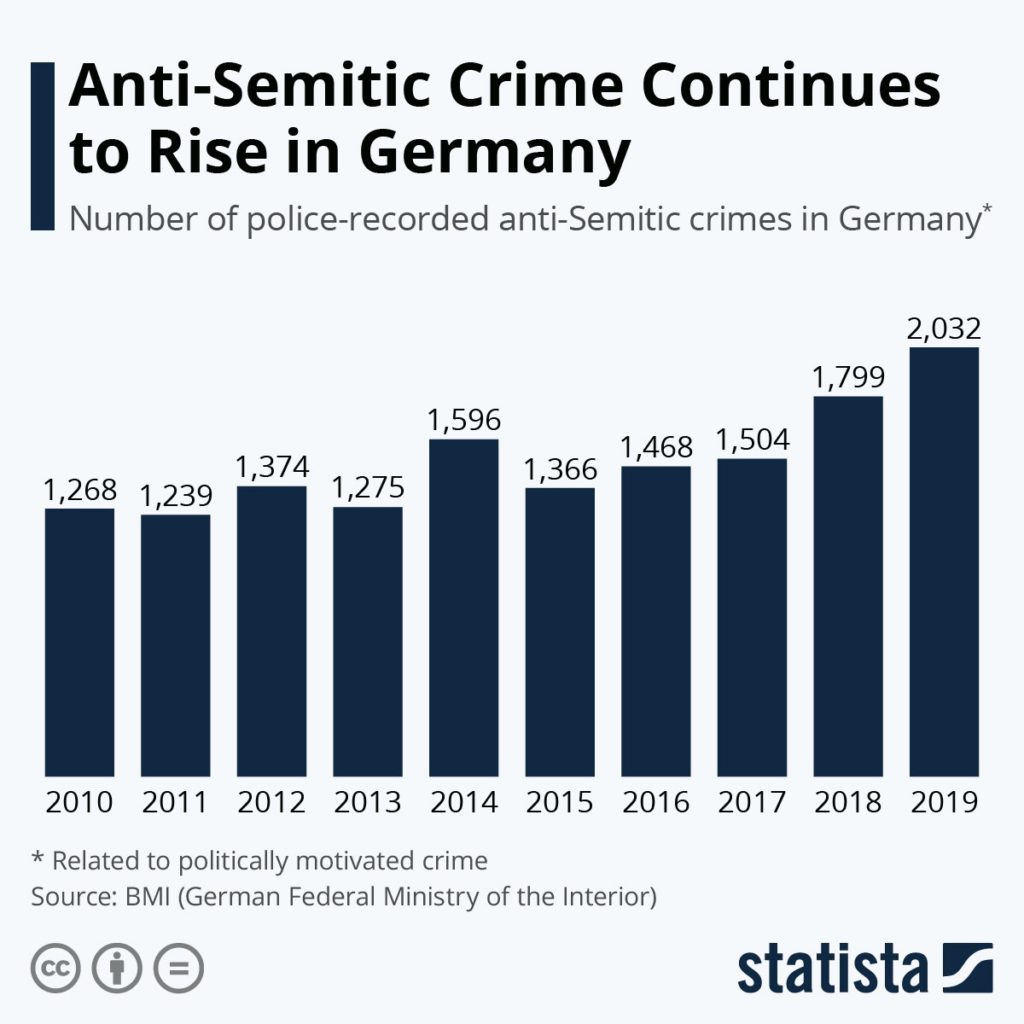 “The number of antisemitic attacks in Germany rose by 13 percent in 2019. According to the latest annual report on political crime by the Federal Ministry of the Interior, there were 2,000 offenses recorded. This amounts to six crimes per calendar day, that’s six crimes too many.

The increase in these crimes in Germany is shocking, in the country that has just celebrated 75 years since the concentration camps were liberated. Every politically motivated crime must be condemned. Particularly, due to Germany’s historic responsibility, we must not to look away from antisemitic attacks, not remain silent and not remain idle.

Conspiracy theorists and the far right, as well as radical Muslim circles abuse the coronavirus crisis to spread antisemitic agitation and Holocaust relativism: On social networks, disinformation is booming and is being used more and more to stir up anti-Jewish sentiments and falsehoods, such as for instance that the pandemic originated from Israel or from “Jewish circles”.

In order to prevent false reports and antisemitism, more coherent measures are needed at EU level and in the member states: For instance, the European External Action Service (EEAS), should focus more on Iran’s antisemitic disinformation activities. The Iranian leader Ruhollah Khomeini recently called for a ‘final solution’ against Israel. The EU must be able to effectively recognise and counter disinformation campaigns in order to stop or at least curb their unrestricted proliferation. To this end, the EU requires sufficient specialist staff to be able to fully identify and take action against antisemitic disinformation.

In addition, Europe needs a uniform standard to be able to identify antisemitism. We therefore need to establish the working definition of antisemitism of the International Holocaust Remembrance Alliance (IHRA) as a reference across the EU and working and ensure that this definition is applied in all member states in key areas such as education and the training of law enforcement.

Previous post 75 years after the end of World War II: The EU must send a strong signal against antisemitism and improve measures at European level Next post “An accelerated push to tackle antisemitism: The Double German Presidency” Webinar