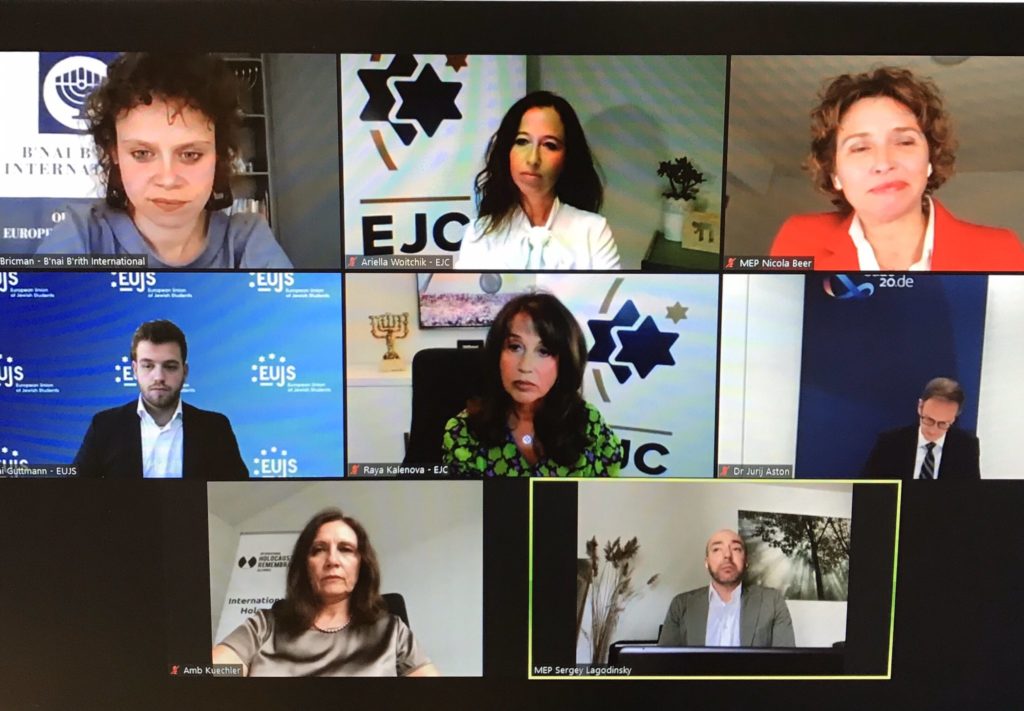 The event was hosted by MEP Nicola Beer, Vice President of the European Parliament and Chair of the Working Group against Antisemitism (WGAS) and MEP Sergey Lagodisky, WGAS Vice-Chair, in cooperation with the European Jewish Congress and B’nai B’rith International.

Ahead of the German presidency of the Council of the European Union, and of the International Holocaust Remembrance Alliance, participants discussed the potential of this double presidency to strengthen initiatives against antisemitism, building on the momentum achieved by the historic Council declaration of 6 December 2018 and adopting best practices from across the EU.

Joining the webinar were H.E. Ambassador Michaela Küchler, Chair of the International Holocaust Remembrance Alliance (IHRA), Dr. Felix Klein, Commissioner for Jewish Life and the Fight against Antisemitism in Germany, Dr. Jurij Aston, Head of Political Affairs at the Permanent Representation of the Federal Republic of Germany to the EU and Benjamin Guttmann, President of the European Union of Jewish Students.

Although the first priority of the upcoming German presidency of the Council will be coordinating the European response to the coronavirus crisis, the debate focused on which areas the German Presidency could give an impulse to tackling the problem of rising antisemitism in Europe, including the fight against online hate speech and disinformation, guaranteeing the security of Jewish communities and institutions, and promoting Holocaust education.

Previous post Statement by WGAS Chair Nicola Beer MEP on the rise of antisemitic political crime in Germany Next post Members of the EP Working Group Against Antisemitism address their greetings for Rosh Hashana – 5781
You must be logged in to post a comment.