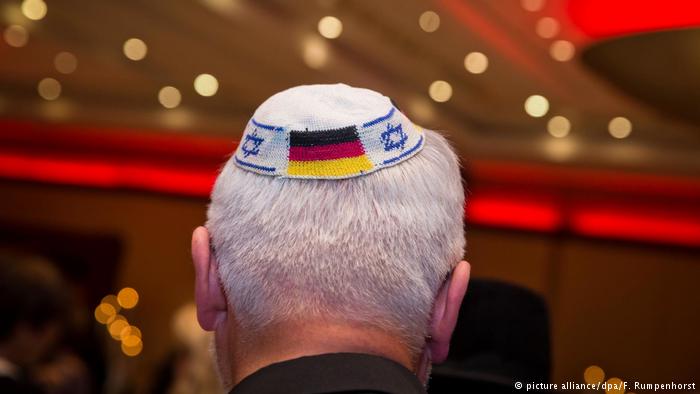 Germany, the Holocaust and the Rise of Anti-Semitism

​I am German, I am Jewish, my Grandmother is a Schindler survivor.

Her fate living through the Holocaust has led me to my academic and professional career and is the driving motivation behind my work combating anti-Semitism and advocating for Holocaust remembrance in Europe as director of EU Affairs for B’nai B’rith International.

Jewish life has re-established itself among German society, but so has anti-Semitism, leaving German Jews more vulnerable and disillusioned than at any point since the Holocaust.

We should be proud and thankful about, as German President Frank-Walter Steinmeier rightfully called it the “undeserved present of having Jewish communities and culture among its midst despite the unbearable past.” But we should also feel ashamed about the undeniable fact that our society is unable to provide emotional and physical safety for its own Jewish citizens, about the despicable necessity for 24/7 police protection of Jewish kindergartens, schools and synagogues in Germany.

This has to be assessed as a devastating failure in the context of Germany’s historic responsibility of preventing anti-Semitism from ever spreading again.

Wehret den Anfängen – resist the beginnings, because “Never Again” means to prevent repeating our mistakes of the past. Not comprehending and implementing the actual message has turned the very essence of what Holocaust commemoration comprises to an emotive overused term with the rise of anti-Semitism as a direct consequence.

A commemorative culture is obsolete without raising sensitivity toward the actual symptoms that led to it in the first place and that needs to be used to establish guidelines to shape our future:

First we have to lay to rest the belief that this could never happen again, and accept the shameful reality that hate, discrimination and anti-Semitism once again has snuck its way into mainstream society, even into politics.

Udo Voigt, member of the neo-Nazi party NPD won a seat in 2014 and is currently representing Germany in the European Parliament, and the recent national elections saw the far-right Alternative for Germany, AfD win 92 seats to become the third largest political group in the Bundestag.

Along with it goes what already is happening in other European countries, pushed by their right-wing populist governments and parties: A re-narration of history through increasing denial of the past and connection to the crimes committed during the Holocaust.

In Hungary statues of Nazi collaborators are erected, Poland is adopting laws that criminalize any mentioning of Polish complicity to the Nazi genocide and now the last taboo of German society has been broken by members of the AfD.

At the forefront is the prominent AfD member Björn Höcke, who infamously called the Holocaust memorial in Berlin, that pays tribute to the 6 million murdered Jews in Europe, a “memorial of shame.” Or party leader Alexander Gauland, who proclaimed that Germans should “be proud of what {their} soldiers achieved in two world wars.” German police recorded 1,453 anti-Semitic incidents in 2017, among them 32 violent disorders and 160 malicious damages.

An overwhelming 90 percent are still registered as far-right motivated, only 25 incidents are considered religiously motivated anti-Semitism mostly from Muslim extremists and one single incident is believed to be left-wing motivated.

It is crucial to note that the dark figures (estimated numbers of unknown cases) are likely much higher, due to lack of reporting and comprehensive surveys but especially, because the escalation of anti-Semitically motivated incidents is so often wrongly labeled or not even registered as such at all.

In every case lacking a caught perpetrator, anti-Semitic incidences are automatically registered as right wing motivated. The figures therefore fail to recognize far-left anti-Semitism in all its forms but also the often violent escalation of imported Islamic anti-Semitism that is acted out completely detached from the Holocaust, and without any reference to Germany’s historic guilt or its special connection to the Jewish state of Israel and its security as a raison d’état

Mainstream society, the judicial system, politicians and police often lack the sheer understanding of and education about anti-Semitism and its mutations.

Blatantly obvious anti-Semitic incidents such as the arson attack on the Wuppertal Synagogue in 2014 are not even recognized as such and consequently don’t end up in these official statistics, therefore leaving the Jewish community traumatized and in shock twice. First through the attack itself and inability of German authorities to neither prevent nor protect, and then again through the incomprehensible inability of a judge to connect the painfully obvious dots.

Equating the policies of the Israeli government with German Jews, holding them responsible for a conflict thousands of miles away and consequently attacking a Jewish community in Germany by throwing a firebomb on a synagogue, equals anti-Semitism in its purest form. There must not be any discussion or room for interpretation.

Because of instances such as the Wuppertal Synagogue arson attack, organizations combating anti-Semitism don’t have the luxury of raising awareness once a year; we have to deal with the hostile reality and its impact on Jewish communities every day.

I believe it is crucial to understand and acknowledge that anti-Semitism is not an extremist ideology, but a worrisome mainstream phenomenon that can be found in the midst of German society among all demographics and ages, in class rooms, rap music, football stadiums, among academics, media and online social networks.

The younger generation shall not feel ashamed or personally responsible for what happened. But it has an undeniable responsibility that grows out of Germany’s historical burden and does not vanish over time. And that is the obligation to protect and cherish Jewish life and culture in German society and not only combat, but eradicate any anti-Semitic tendencies.

I believe that the underlying issue with German Holocaust commemoration lies in its discrepancy between the mutual omnipresent condemnation of the Holocaust and lack of actually addressing the cause of hate and evil in any way.

This discrepancy then serves as the breeding ground for a dichotomy in German society – that ubiquitous historic responsibility and guilt is able to exist in parallel to rising anti-Semitism.

Holocaust commemoration needs to serve as the foundation on which to build strategies to combat the virus.

If this foundation is an empty shell, motivated by guilt and forced societal obligation rather then individual willingness to ask the crucial questions of how and why, and consequently draw the painful lessons by learning from the past, the commemoration day becomes meaningless; and so is any politician’s repetitive reminder of “Never Again,” their many references to the historic responsibility and the emphasis on this apparent Judeo-Christian heritage.

But besides the moral impediment that grows out of Germany’s historic responsibility, it should be in everyone’s self interest to address anti-Semitism.

Such discrimination does not stop with the Jews – it corrupts and corrodes the very core of our democratic society as a whole.  Eradicating anti-Semitism should be an imperative in the name of modern civilized society.

One should not speak out against anti-Semitism because of a moral obligation to be a philo-Semite or friend of Israel, but for the simple reason alone that a fellow citizen and human being is harassed or attacked.

This might sound overly simplistic, emotive and obvious, but is nevertheless not being implemented in our approach to tackling the issue, or in developing strategies to combat it.

Instead ant-Semitism has become so powerful that it outgrew the Jews and can function even without a single Jew actually being present.

Commemoration of the Holocaust needs to serve as a guideline and toolkit that works not only in the context of historic guilt. Remembrance, based on guilt alone, can become overwhelming and might even backfire to the extent of paralyzing individuals, national identity and society as a whole.

Nazi Germany did not invent anti-Semitism, but it did invent the Final Solution, that culminated in the industrial murdering of 6 million Jews.

It is essential to focus on underlying structures, the root causes of the Holocaust and analyze accountability for the horrors of the past, while directly addressing current anti-Semitic sentiments in all layers of society and politics. This needs to happen in close cooperation with Jewish communities themselves but also by building coalitions between special coordinators inside government institutions, civil society and other minority groups that are discriminated against.

“We do not want to preserve our dismay, but draw lessons, that can provide guidance also for future generations,” then German President Roman Herzog urged while establishing the official commemoration day in 1996.

Holocaust remembrance is a responsibility and obligation of German society as a whole.  But so is the engagement in combating anti-Semitism, as emphasized by the German government’s recent anti-Semitism resolution that was adopted with large majority. The resolution reads in part:

“The German Bundestag is grateful, that Jewish life and culture exists after the national-socialist dictatorship and despite the Holocaust. Its existence is an enrichment to our society and, in light of our history, a special declaration of trust toward our democracy and state of law, that we want to live up to and have to be committed to forever.”

We must not destroy this trust, and cannot leave German Jewry alone in combating the re-emergence of mainstream anti-Semitism. We should protect and cherish Jewish life in Germany with everything we have, not only due to the moral obligation based on Holocaust commemoration or guilt, but because it elevates our democratic society, our dignity, common values and human rights as a whole.

About the author: Benjamin Nägele was named director of E.U. affairs for B’nai B’rith International in 2015. In this capacity he focuses on promoting EU-Israel relations and advocates for Jewish causes at the European institutions in Brussels. He previously worked as an EU affairs officer for B’nai B’rith International and as a policy advisor at the European Parliament.