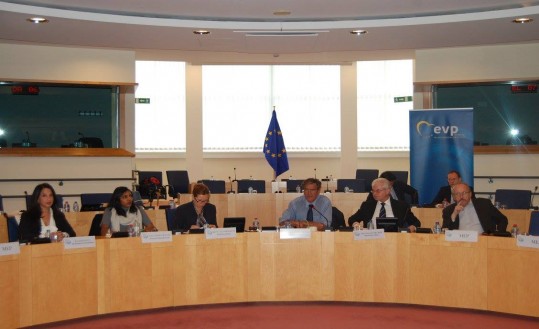 April 19, 2016MeetingEP WGAS
Tuesday, 19 April 2016 – The European Parliament Working Group on Antisemitism (WGAS) gathered this morning, focusing on the issue of Islamist extremists and the rise of far-right parties as a threat to Europe and Jewish communities. A documentary named “Europe in crisis – A shattered heaven” was screened, followed by a debate with various Members of the European Parliament, including Mr Lopez Aguilar (Chairman of the group), Mr Heinz K. Becker and Ms Cecilia Wikström (Cochairs of the group). Vidhya Ramalingan, expert on radicalisation issues, addressed the audience.

The event was attended by MEPs coming from various Member States and political groups, advisors, staffers and NGO’s representatives.

The Chair of the WGAS, MEP Juan Fernando Lopez-Aguilar (Spain, S&D), opened the discussion mentioning the vicious cycle of violence that is threatening European cohesion and the necessity to engage in the fight against on-line hate speech. The Vice-Chairman of the WGAS, MEP Heinz Becker (Austria, EPP) requested the improvement of EU legislation in order to effectively tackle antisemitism and the urgency to follow-up with solutions on the issues on which the documentary shed light. Mr. Becker also referred to the urgent need for each Member State to adopt the working definition on antisemitism and to create a new European investment package against antisemitism as “what starts with the Jews ends with the whole society.”

Vice-Chairman, MEP Cecilia Wikström (Sweden, ALDE), demanded a holistic approach to tackle the problem, combining both freedom and security for all European citizens. MEP Wikstrom raised the fact that besides the obvious antisemitic feelings present in far-right movements, there is also an antisemitic tendency in the far-left, as exemplified by the recent dismissal of the Swedish Housing Minister, Mehmet Kaplan. Referring to the incidents report that was provided by the EJC, MEP Wikström said that the report is a frightening piece of information which needs to be taken extremely serious as the climate is getting more and more hostile in Europe. She called upon her fellow colleagues to work side by side, , suggest draft resolutions and share best practices in the fight against antisemitism.

The comments were followed by a speech of Ms. Vidhya Ramalingam, Director of Moonshot CVE, an organization developing innovative methods of response to extremism and community violence who centred her message on the tools used by far-right movements. Ms. Ramalingam, who was also interviewed in the documentary, expressed the similarities that exist between far-right movements and Muslim radicals and how they feed off one another. She also said that the methodology used to approach these two forms of extremism is the same.

Today democracy is a target and we must strike back, we need to defend our values, MEP Frédérique Ries (Belgium, ALDE) said. After the attack on the Brussels Jewish museum and on the Hypercasher in Paris nobody can question any longer the rise of violent antisemitism in Europe. We do not have to sacrifice liberty in order to have security; we need to have both, MEP Ries added.

MEP Peter Niedermuller (Hungary, S&D) mentioned that far-right ideologies are attracting more and more middle class people, and thus are becoming, in a way, more “acceptable” and therefore dangerous. He continued by saying that we shouldn’t tolerate what was never tolerable in Europe.

The meeting ended with requests to screen the film again with different crowds.