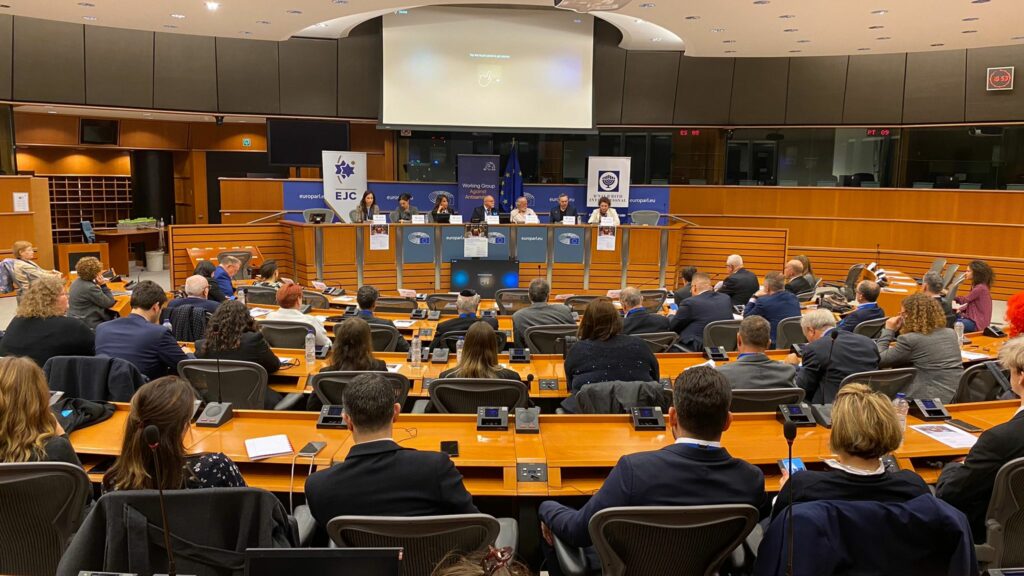 The conference brought together policymakers, Jewish community representatives and actors from the civil society who are driving efforts to promote a positive Jewish identity and to increase knowledge about Jewish life among the general public. Panellists shed light on the important contribution of Jewish communities to European society and explained the humanitarian efforts offered by Jewish civil society organisations to Ukrainian refugees.

The event was hosted by MEP Sergey Lagodisky, WGAS Vice-Chair, and Nicola Beer, Vice President of the European Parliament and Chair of the Working Group against Antisemitism, in cooperation with the European Jewish Congress (EJC) and B’nai B’rith International.

EJC Director of European Affairs Ariella Woitchik, who moderated the event, opened the discussion emphasizing the purpose of the conference: “We wanted to resume our activities in the European Parliament with a more positive angle. Therefore, we are here today to celebrate Jewish culture, history, tradition, diversity and sense of belonging to Europe.”
In his opening remarks, WGAS Vice-Chair Sergey Lagodinsky said: “This event is meant to highlight Jewish voices from all our Member States. We wanted to shed a positive light on what it means to be Jewish in the European Union, underlining that our Jewish identity is intertwined with our European identity.”

EJC CEO and Vice President Raya Kalenova expressed her gratitude to WGAS MEPs for their commitment and excellent work over the last years: “The celebration of Jewish life requires a Europe where Jews are safe to live according to their values and traditions and we thank our colleagues here in the European Parliament for continually asserting the rights we have as Jews and as European citizens, free from hate & discrimination.”
Raya Kalenova highlighted the importance of reinforcing a positive Jewish identity: “We need to continually stress our diversity, to destroy the myth of the stereotypical Jew in the minds of conspiracy theorists and haters. It does not exist, it has never existed. We just would not be Jews if it was. Jewish life must never be defined only by antisemitism because it would then be defined by antisemites. As a free people, with as long a history on this continent as everyone else, it’s time to accentuate the positive.”

“Faced with external threats, we understand the need to come together with our friends and allies. The best example illustrating this sense of solidarity is SASCE project: Christian, Jewish, Muslim and Buddhist communities joined forces to improve security in places of worship across the European Union. We are also proud of SACC by EJC and EJC’s affiliated Jewish communities that have been working around the clock to offer support to refugees, opening their arms, their pockets, and their homes to thousands of Ukrainian Jews and non-Jews,” she added.
Co-founder of Limmud and Chief Executive of the Commonwealth Jewish Council Clive A. Lawton OBE presented the successful story of Limmud, the international Jewish adult education movement: “Limmud means learning in Hebrew. An educator is someone who has the responsibility of transmitting something to someone else.”

Lawton shared his thoughts on his extensive experience educating about and bringing visibility to Jewish life among non-Jewish audience: “At Limmud we try to bring people together, it unites generations and denominations. Everyone who wants to get involved, can get involved. The organisation is not driven by franchises or rules, it is driven by values and principles”, he added.

The Former President of the Jewish Community of Warsaw Leslaw Piszewski explained the humanitarian efforts that have been carried out under his leadership since the war in Ukraine broke out. Thousands of Ukrainian refugees, Jews and non-Jews, found not only shelter in his community but also care and support: “When the war started, the number of Ukrainian refugees arriving to Poland rose dramatically, from hour to hour, but we didn’t give up and we decided to help everyone in need, providing them with all kinds of assistance. The first organization that supported us immediately with this task was the EJC.”

Finally, MEP Nicola Beer, Vice-President of the European Parliament and Chair of WGAS delivered concluding remarks, emphasising “As MEPs, we have a special responsibility to work with and for the citizens we represent. Therefore, at the Parliament we must not only work on remembrance or the fight against antisemitism but to foster Jewish life in the diversity we see today.”

“If we want Jewish life to flourish in Europe, we need to raise awareness of its diversity, which is part of our common European heritage. I cannot think of European history without the contribution of Jewish intellectuals and scientists. We are proud of them, and we need to make them more visible,” she concluded.

The conference was attended by Ambassador Haim Regev, Head of Israeli Mission to the EU and NATO, Ambassador of Hungary to Belgium Tamas Kovacz, Ambassador of Bulgaria to Belgium Plamen Bonchev, Members of the European Parliament, the European Commission officials, civil society organisations representatives as well as presidents and directors of Jewish communities from 25 countries.