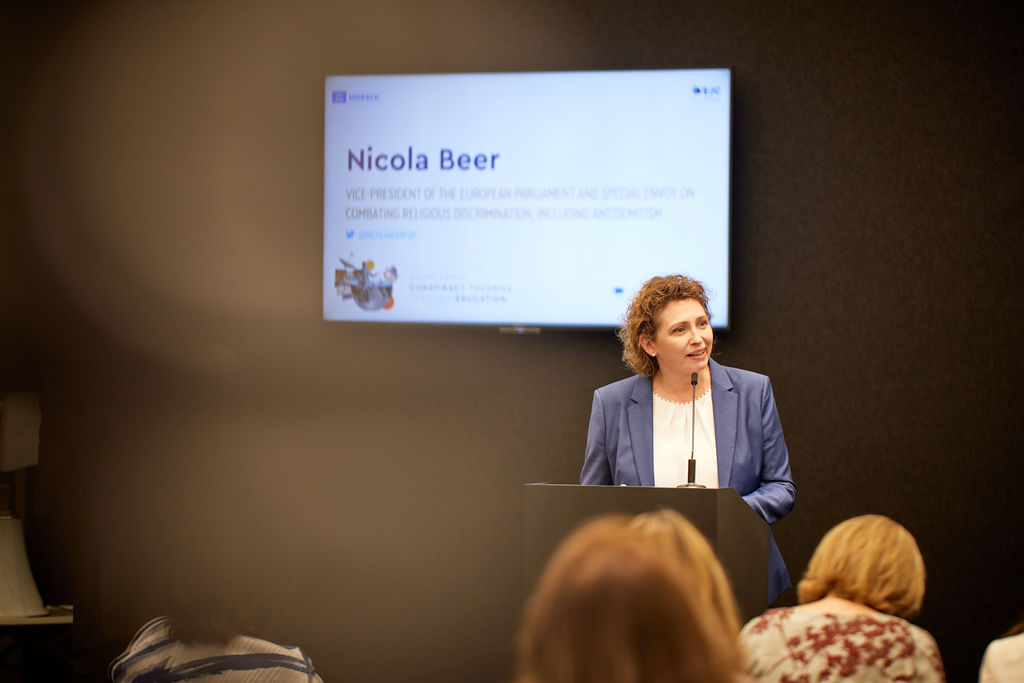 I would like to thank the European Jewish Congres and UNESCO for organising this important symposium and for the honour that you asked me to address you today.

After getting this morning the most valuable insights on what can be done to combat conspiracy theories by education, I would like to share with you my perspective on this topic – my perspective as a European politician and especially as Vice-President and Special envoy of the European Parliament on combatting religious discrimination, including anti-Semitism.

In that capacity, I experience the effect of conspiracy theories, of fake news, malignious disinformation and hate speech. They all are elements of attacks against democracy, against our liberal societies, against our social cohesion, against religious minorities and ethnic groups,in short: against all of us. Whatever and which actor stands behind it, the effect is always destructive.

There is always the potential that conspiracy theories lead to a loss of faith in scientific expertise and the reliability of the media, to political disengagement, to violence and even war.

Conspiracy theories have often served and are still serving as motivation and justification to commit hateful crimes or to exert violence towards human beings. The most horrible conspiracy theory with devastating consequences became the ideology of Nazi-Germany and led directly to the Holocaust. In my capacity as special envoy, combatting antisemitism is one of my highest priorities.

In Europe, in addition to religiously motivated anti-semitism, Jews have been targeted by conspiracy theories for centuries. Being falsely blamed for diseases, economic crisis, and wars.

Throughout history, antisemitism is closely and inextricably linked to conspiracy theories. It is fueled by them. You can’t think the one without the other.

And today, in the 21st century? Today, unfortunately, conspiracy theories and anti-Semitic narratives are on the rise again. They flourish in the context of the COVID-19 pandemic as well as in Putin’s brutal war against Ukraine.

In the months before the war, the propaganda of de-nazifying the Ukraine and the claim of genocide on Russian minorities in Ukraine increased significantly. It has been spread by government sources as well as by traditional and social media and has been supported even by religious leaders and the official Russian church.

With perfidy that could hardly be surpassed, the Russian government then linked the accusation of Nazism with antisemitic rhetoric against the Ukrainian government.

Every such surge of anti-Semitism puts European values such as respect for democracy, human rights, rule of law, fundamental freedoms, good governance and the stability of our society in danger.

It is for this reason that I am glad, that all of us come together here to discuss and share experiences on how we can address, prevent and combat conspiracy theories and antisemitism. Because, one can´t counter conspiracy theories only top down by laws and government regulation. We need a whole-of-society-approach.

How should we deal with conspiracy theories? What needs to be done?

The way people think and build their opinion and believes is influenced by family, school, media, peer groups and leaders. In all these areas, we have to find ways and instruments to avoid and combat conspiracy theories effectively.

Reaching convinced conspiracy theorists by counterarguments is difficult – some say that it is impossible: as Sander von der Linde pointed out today.

This makes it all the more important to prevent people from adopting conspiracy theories at an early stage and to build resilience in our society and educational systems.

I am thinking about teachers who have such a great influence on our youth. It is crucial to be able to discuss mechanisms and the danger of conspiracy theories in the classroom, strengthen critical thinking as well as empathy in order to challenge stereotypes and hatred. Teaching material, study cards as well as textbooks, need to be reviewed on regular base and adapted to an education free of discrimination, racism and violence.
Teachers and students at school and university need to be sensitised to these issues. Here I welcome the proposal of Ilana Cicurel on specific training lesson for teachers. Train the teacher has an impact on the students.

We should not allow for propaganda to find its way into classrooms. We need to be vigilant. Therefore, I want to thank UNESCO for their just launched advocacy document for teachers to address conspiracy theories.

In today’s world, we have to become quicker at adapting to media developments. Especially on social media platforms, conspiracy theories spread fast and reach thousands, if not millions, of people.

DSA is a game-changer for creating a safer digital space free of antisemitism.But, we need to catch up. We need specific programs on media education at school curricula. Analytical skills and a critical approach to sources are crucial in order to be able to classify and evaluate information.

#ThinkBeforeSharing, for example, is a campaign by UNESCO in collaboration with the European Commission, Twitter and the World Jewish Congress to stop the spread of conspiracy theories online during the COVID-19 pandemic.

More campaigns like this are needed to raise awareness and sensitise users of social media to the danger of any conspiracy theories: Never to be silent, when we get across conspiracy theories, never to accept the false argument, never to give room to the spread of hate and lies.

With regard to combat antisemitism and anti-Jewish conspiracy theories the IHRA Working Definition of antisemitism has to be widely adopted.

We need common ground on which we can identify, prevent and combat antisemitism. I am advocating for its adoption and enforcement in all EU institutions and member states.

Additionally, we need to think about law enforcement as well to become better at preventing anti-Semitic hate crimes through assessing security threats based on conspiracy theories. We should not allow the dissemination of hate and lies, we have to stand up against the culture of impunity and we need to defend our democratic values by all means.

But – we have at the same time to protect the freedom of speech,
the freedom of expression and science. We have to defend the „right to be wrong“.This is sometimes hard to bear. But we have to, if we don’t want to destroy our freedom by trying to protect it. We have constantly to define the narrow path – where are the limits of freedom of speech and where does hate speech start? What is a conspiracy theory and what is just a wrong argument?

For this reason, I want to encourage all of us: Let us join forces on all levels,so that we, sooner rather than later, build a world without antisemitism, without discrimination, without racism, and with respect for all religious beliefs as an integral part of our societies. And so, I am looking forward to listen to the discussion.