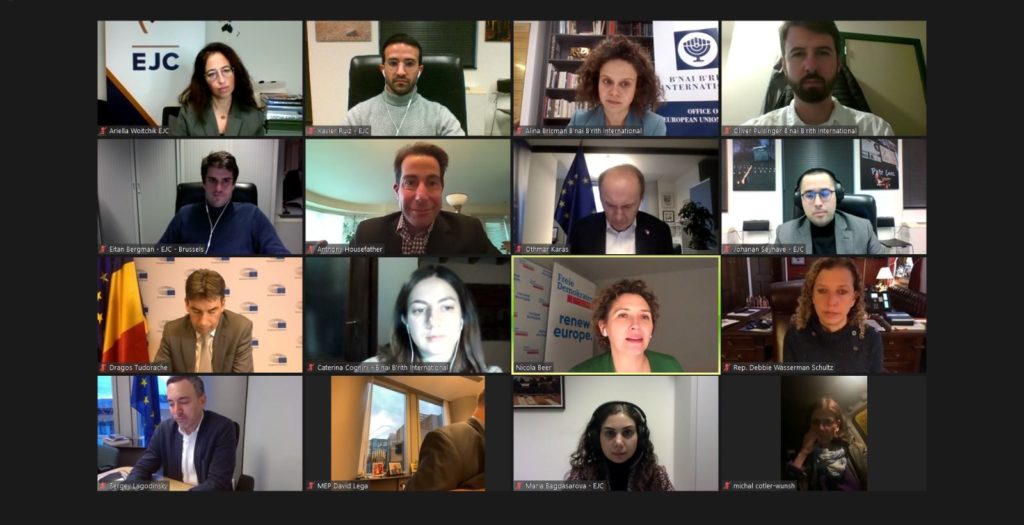 (Brussels, 9 December 2021) The European Parliament Working Group Against Antisemitism held an exchange of views with the Inter-Parliamentary Task Force to Combat Online Antisemitism, a cross-party group of lawmakers from Israel, the US, Canada, Australia, and the UK.

MEP Nicola Beer welcomed the exchange of views, whose aim is to expand existing networks and build more synergies to raise awareness about the worrying issue of online antisemitism.

MEP Sergey Lagodinsky gave an overview of the mission and activities of WGAS in the European Parliament, to raise awareness about antisemitism and bring together partners to take proactive and effective legislative measures against antisemitism Incredible important group to sensitise to make this an important topic on the agenda of the Parliament.

MEP Lagodinsky also introduced recent developments in the fight against antisemitism in the EU, in particular the EU Strategy on combatting antisemitism and fostering Jewish life, and the newly released Overview of antisemitic incidents recorded in the European Union by the EU Fundamental Rights Agency, in particular the challenges experienced by governments and civil society regarding data collection of antisemitic incidents.

For his part, MP Anthony Housefather emphasised the importance of recognising the transnational nature of the problem of online hatred. This should take into account different concepts of freedom of speech in different countries, but also the need to draw a line between free speech and hate speech. There is a real issue concerning the accountability from platforms, especially where algorithms are not being disclosed and sometimes produce incentives to send users from hate to hate.

MK Michal Cotler-Wunsch welcomed cooperation between the Working Group and the Taskforce, in recognition that online hatred is a global challenge that needs to be addressed from a global perspective. Nevertheless, antisemitism is a predictive example of disinformation, whose consequences reach way beyond the direct victims of antisemitism. Consequently, there is an urgent need to advance the conversation with the platforms and the understanding that the most important aspect is transparency and raising public awareness.

Rep. Debbie Wasserman-Schultz welcomed new avenues of cooperation between parliamentarians and emphasised that the whole idea that the notion of geographic boundaries calls to work together across borders to combat the horrendous and intractable problem of online hatred. In particular, the abuse and weaponisation of algorithms is a pressing issue that calls for regulatory reform.

B’nai Brith International Director of EU Affairs Alina Bricman gave a brief overview of efforts at the EU level to combat antisemitism online, in particular through the upcoming Digital Services Act. The question of liability is at the heart of the online hate speech discussion and the DSA has the potential to provide some interesting innovations that could serve as best practices elsewhere.

MEP David Lega stressed that the cooperation between the working group and the task force should serve to promote the accountability of platforms transnationally. To this end, the IHRA working definition of antisemitism is a universal resource to identify incidents both online and offline which should be adopted and implemented by all relevant stakeholders.

European Jewish Congress Director of European Affairs Ariella Woitchik welcomed cooperation between WGAS and the Online Taskforce provided the perspective of European Jewish civil society and insisted on the insisted on the importance together with online platforms to implement the IHRA working definition in its entirety, and to implement it in their monitoring efforts.