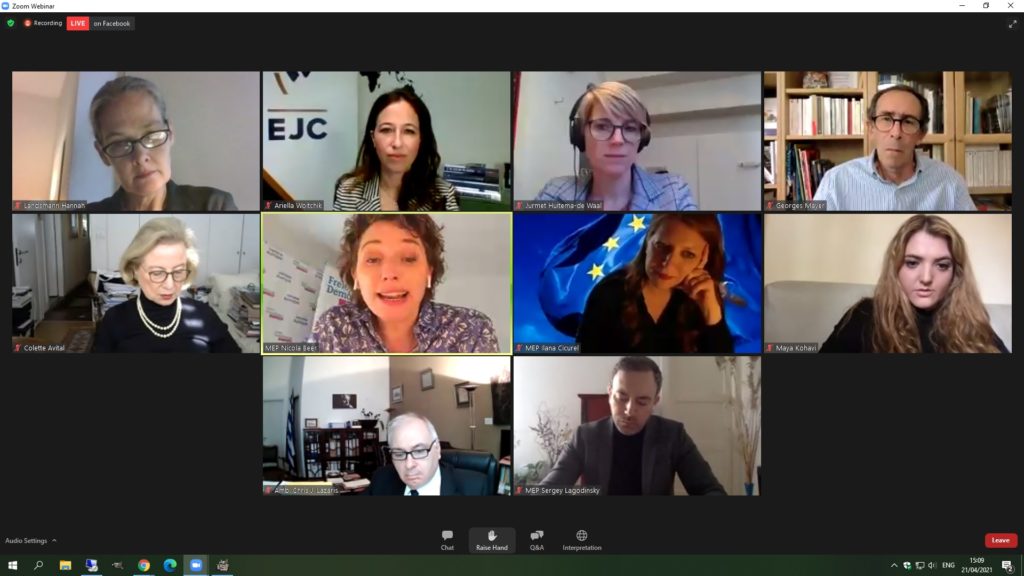 “Holocaust education and remembrance. Keeping up with the digital age” Webinar

The European Parliament Working Group against Antisemitism (WGAS), organised a webinar entitled “Holocaust education and remembrance. Keeping up with the digital age” on April 21st.

The online conference brought together policymakers, civil society stakeholders and experts from leading Holocaust educational projects to provide a forum for sharing best practices and the future vision for Shoah education at a time of a growing generational gap, digitalisation and rising disinformation.

The event was hosted by MEP Nicola Beer, Vice President of the European Parliament and Chair of the Working Group against Antisemitism (WGAS), MEP Sergey Lagodisky, WGAS Vice-Chair, MEPs Ilana Cicurel and Brando Benifei, both WGAS Board members, in cooperation with the European Jewish Congress (EJC) and B’nai B’rith International.

EJC Director of European Affairs Ariella Woitchik, who moderated the event, opened the discussion looking at innovative ways to teach and remember the Holocaust and looking at the challenges faced by teachers and educators today.

MEP Nicola Beer, Vice-President of the European Parliament and Chair of WGAS stressed the importance of prevention and education: “The Covid-19 pandemic helped spread antisemitic online hatred. This is why we need to start early and with a multifaceted approach: we need to look into schools and universities and their curricula and at the training of public servants.”

“The IHRA definition of antisemitism is the right tool of prevention. It also needs to be included in the revision of European legislation applicable to digital platforms. Especially as it regards the illegality of Holocaust denial, we have to talk more and cooperate better with Member States and platforms,” she added.

In his opening remarks, Ambassador Christodoulos Lazaris, Chair of the IHRA, underlined that the focus of the IHRA Greek Presidency is Holocaust education for a world with no more genocide. He further explained that “in advancing our objectives, the Ministry of Education has achieved commendable work in advancing education on the Holocaust across Greek society.”

MEP and WGAS Vice-Chair Sergey Lagodinsky who hosted the first panel of speakers pointed out that “we are losing survivors as living witnesses. But I believe we should not emphasize this as a deficit of education practice. The young generation is far away from a perspective of the Holocaust, not only as a tragedy, but also as a crime.”

Ms. Kochavi explained that the most emotional aspect of the social media campaign is the direct messages that Eva still receives even today: “The messages are very emotional and touching. This is the strongest impact that @Eva.Stories has made.”

Jurmet Huitema-De Waal, Project leader Education of Anne Frank House, introduced to the public the work of the museum based in Amsterdam: ‘”As an education institution we target teachers. It is very important to find new ways to bring Holocaust remembrance to the attention of young people.” She also underlined the importance of the new project ‘Anne Frank Video Diary’: “We believe it’s a new and appealing way to reaching out to young people, to tell the story of Anne Frank and make sure that her story is known.”

Hannah Landsmann, Communications and Education Manager at the Jewish Museum in Vienna, stressed the key role of museums in Holocaust education and remembrance: “In museum education, you should not present what others can read on Wikipedia. You should come up with something different. At the Jewish Museum of Vienna, we invite pupils to interact with the objects and tell the story behind them.”

Hosting the second panel of speakers was MEP and WGAS Board member Ilana Cicurel, who remembered the thoughts of Simon Veil, Holocaust survivor and first female President of the European Parliament: “She did not like very much this message of duty of memory. But you can of course convey the facts, the history and the mechanisms that led to genocide.”

“When you address emotions only, it’s easy to reach a trivialisation of the event. We should not consider the Holocaust only as a terrible event, we also need to be able to relate to it. People in charge need to question how they are going to share the story of the Shoah.”

Author and History teacher, Iannis Roder, addressed the importance of Holocaust education in schools: “The Shoah is not only an anti-racism lesson. I asked myself what are the aims of teaching the Holocaust. We must ensure that such events don’t happen again and tell our students that the safeguard that we have is democracy.”

Georges Mayer, Founder and President of Convoi 77 project, told the story and the aim of his educational programme: “Despite 30 years of compulsory Holocaust education, too many young people do not know enough about the Shoah. With the internet as the major source of information, we had to change our focus.”

Mr Mayer further explained: “Students living in the villages where Convoi 77 was running through conduct an investigation focused on one deportee who used to live near where they live today. Our approach is based on active pedagogy, through microhistory to encourage students to engage with these stories.”

Colette Avital, Chair of Center Organizations of Holocaust Survivors in Israel, raised awareness of the dangerous trend of countries criminalising Holocaust research: “To create a new identity they seek to reinvent a useful past. And so they try to rewrite a new identity.”

Finally, MEP and WGAS Board member Brando Benifei, delivered concluding remarks, emphasising that “as an MEP active in youth policy & education policy, we still have the virus of authoritarian thought when democracy is not able to make itself understandable to young people, so that conspiracy theories & hate against minorities and vulnerable groups thrive”.

“We need to explore ways to promote the memory of the Holocaust through non-formal education. The commitment of survivors like Liliana Segre of telling her story to the next generation in a very empathic and understandable manner has been very effective,” he stressed.

Previous post Statement by WGAS Chair Nicola Beer MEP on the Council Declaration on mainstreaming the fight against antisemitism across policy-areas Next post IHRA Chair’s statement on recent antisemitic violence and hate speech
You must be logged in to post a comment.