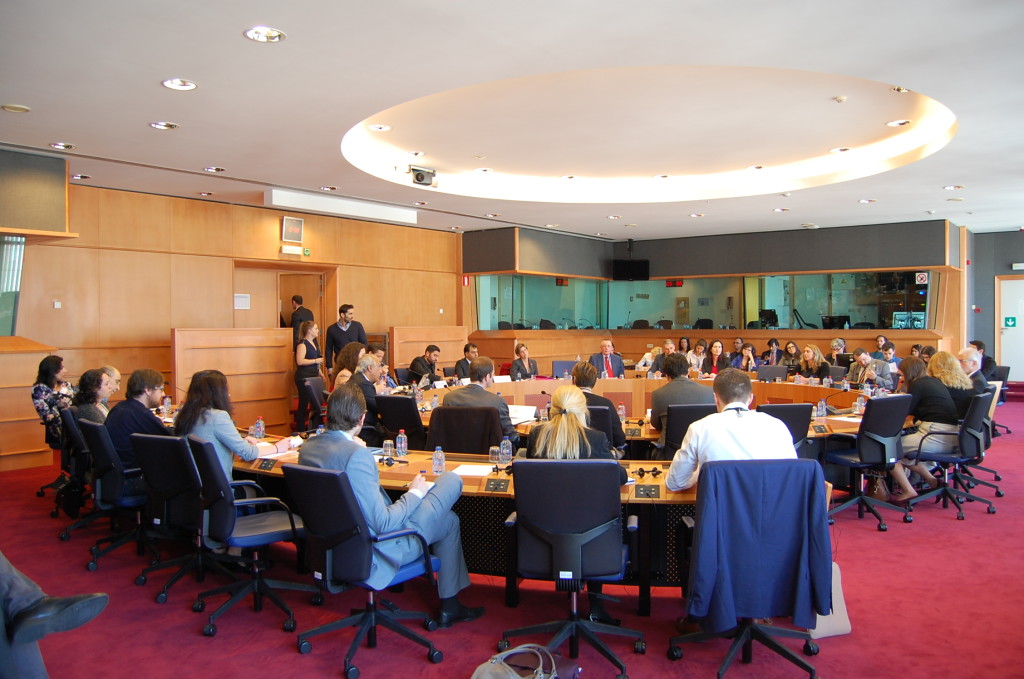 On 14 April 2015 the European Parliament Working Group on Antisemitism met to discuss the rising problem of Antisemitism within Muslim Communities. The meeting was chaired by the group’s co-chair Cecilia Wikström MEP. Around 30 MEP’s from across the political groups and from 16 member states attended the meeting.

MEP Wikström stressed that because it is such a sensitive topic, it has to be addressed and we must not allow this topic to be hijacked by extremists. She also mentioned the issue of a lack of research on this phenomenon.

He further emphasized the role social media has in terms of having reduced the age of young Muslims targeted by Islamist groups “The average age of the young men and women going to Syria and Iraq is 14-25. It is crucial to work with social media stakeholders to counter radicalisation. Taking down websites is not good enough. For every 1100 websites taken down (by the UK Government, for example), there are 2000 new ones going up. What is important is to implement counter narratives online, as well as to contextualise the scriptural reasoning the extremists use to base their hatred on religion.”

Haras Rafiq implied that an individual doesn’t go on the Internet to buy a pair of shoes and end-up becoming a jihadist. He highlighted the five key aspects of radicalisation and antisemitic narratives: Intellectual, ideological, emotional, social, spiritual aspects saying, “these narratives need to be deconstructed. People are living parallel lives. Even I am a slave to social media. People live one life in the real world, and one online. Inter-faith is great, but we need more interaction online. I got my first death threat in 2006; five people in our organisation are currently under death threats. This is the reality of how we live.”

Haras Rafiq recommended working with Facebook, Twitter and Google and increase what he calls social incubators. Bring people together so that we can fight back online.

Aycan Demirel, co-founder of the Kreuzberg Initiative against Antisemitsm explained that this organisation was built as a reaction to the rise of antisemitism with the goal to develop strategies against this surge. They work with Muslim youth that are not radicalised as such, but have antisemitic views. They also train teachers who work with teenagers within neighbourhoods where 80-90% of pupils are Muslim.

Siavosh Derakhti founder of the non-profit organisation Young People against Antisemitism and Xenophobia explained that antisemitism has always been a big issue in Malmo. Many Muslims blame Jews in Malmo for the Israel-Palestinian conflict.

He stressed the importance of the residents of Malmo standing up for their Jewish citizens. He said, “We must ensure that Jews can feel safe in Europe. Today they are not safe. I started by initiating a class trip to Auschwitz. I wanted to build a bridge between Jews and Muslims. I then continued fighting against antisemitism and started a non-profit organisation. We lecture on antisemitism and xenophobia in schools and inspire young people to make a change and train youth ambassadors to lead their own groups in the future. We also organise trips to concentration camps, and invite survivors to speak to our young ambassadors.”

Like Haras Rafiq, Siavosh Derakhti stated that he had been threatened many times, from phone calls, emails and on Facebook. These threats include statements such as “they will slap me, gas me, and send me in a body bag back to my country. But I ask them, which is my country? I am Swedish, I was born in Sweden.”

Siavosh Derakhti defined the origins of the hatred as coming from the extreme left wing, the extreme right wing, and the extreme Muslim groups.

The meeting was concluded with the intervention from representatives from European Commissioner Vera Jorouva’s Cabinet who stated that the input from the meeting would be taken on board and assessed further as part of the first Colloquium that will be held on the 1st and 2nd October 2015.